Set up a tour today: 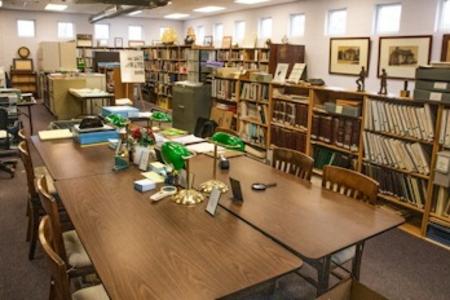 Ron and several other board members immediately started meeting with prospective contractors; in November, 2002, McGrath Construction was selected for the project.  The groundbreaking ceremony was held on December 15.  Fred Bouchein turned the first shovelful of dirt. Construction progressed quickly in spite of inclement weather.  At first, it was just a hole in the ground; then concrete was poured, walls started to appear, and the floor and roof were finally installed.  Structural work was completed on August 31, 2003. Now, the space had to be turned into a library.  Lois Waninger donated the carpet.  The monies for book cases, tables, lamps, chairs, and other furnishings were contributed by individual donors.  Frank Foley painted the river scene mural on the wall of the steps.  Ron Bolte and several others installed nameplates recognizing donors.  And of course, the library was filled with uncountable books, maps, photos and genealogical resources.  Plans were drawn up for a dedication ceremony. On October 26, 2003 a luncheon was held.  The Library was dedicated as the Frederick W. Bouchein Library.  Fred cut the ribbon and was the first to enter the Library as it officially opened to the public.

The Bouchein Library contains records of the village of Carondelet; the Delor family papers; the Lois Waninger Collection of youth literature; the Willis Potthoff Collection of Leo Edwards and Edgar Rice Burroughs texts; microfilm records of US Censuses, newspapers and local organizations dating to the 19th Century; books on St. Louis and Missouri history; early maps; tens of thousands of photos; and much, much more.  It is open to the public during the Carondelet Historic Center’s operating hours and by appointment. 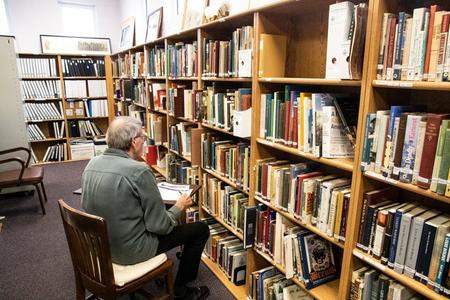 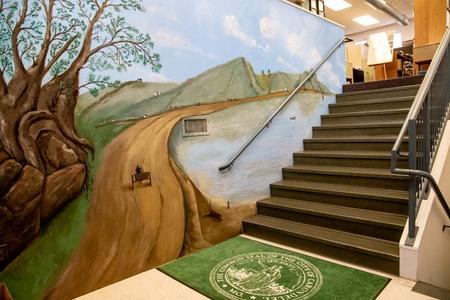 - Thousands of photographs of individuals, houses, schools, churches and

buildings in the Carondelet area

- Over 200 Genealogical collections of area families

- The Tesson Family Papers dating to the 1790s

Whenever you shop on Amazon.com, use the following link.  CHS will receive a percentage back from Amazon Smile.​

- The Delor Family Papers (Founder of Carondelet in 1767). A collection of

Something had to be done:  either they would have to stop accepting valuable historic books, pictures, maps, and information about the Carondelet area; or a new library space would have to be identified. The options were either to acquire another building offsite or to build an addition to the Carondelet Historic Center.  After much discussion, it was decided that construction of a dedicated library annex was most desirable; but that seemed like a distant dream as the total cost would exceed $300,000. A capital fund drive was started in 2001 in support of the library project and it received tremendous initial support; a bequest of $75,000 from Cadence Warden provided a large boost to the early effort.  The library began to seem like an obtainable goal; the contributions slowed, however, and it looked as though the project would be undertaken many years in the future. Then one day in the summer of 2002, Fred Bouchein contacted Ron Bolte and asked how much was still required to build the library.  Ron replied, “$200,000,” hoping that Fred might be able to contribute modestly toward the project.  Fred said simply:  “Let’s go to my broker.”  After their meeting with his broker, Fred handed Ron a check for $200,000.  Suddenly, the library was funded and on the verge of becoming reality.​ 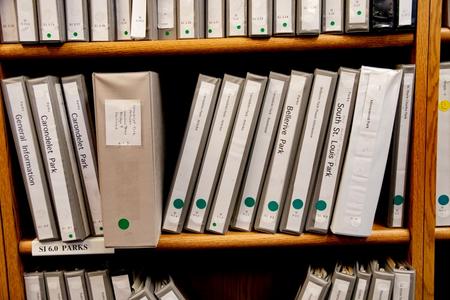 The Carondelet Historical Society’s library had humble beginnings.  What began as a single filing cabinet drawer quickly filled and demanded space as CHS’s collection of historic documents increased.  With the acquisition of the former Des Peres School building in 1981, a room on the second floor was designated as the society’s first library. Just as with that humble filing cabinet drawer, the problem of an expanding collection and preciously scarce space quickly became evident; items were donated at a dizzying pace as more and more people became aware of the facility.  In addition, some who wanted to utilize the library’s resources were unable to climb the steps. The early library volunteers (Jean Bolte, Dorothy Bauer, Rich Fernandez, Marie Kness, June Norman, to name a few) quickly ran out of room for new additions to the collection.